A number of years ago, I did a fashion and headshot photoshoot for aspiring model, Petric Federici. Since our session, the quality of my work has become significantly better. But I wanted to share the images with you because I have recently learned something about this young man--a discovery that has given me an even higher degree of respect for him. Petric is a 28-year-old, easy-going medical assistant in Fairfax, VA. He seems like so many others his age—young, carefree, not yet weighed down by the responsibilities of life—yet he is not like them at all. No one would guess that his past includes horrific and indescribable human indignities.

A native of Romania, Petric is a survivor of one of the country's cruelest orphanages. Many of Romania's institutionalized children--particularly those left at the orphanage as infants--were so neglected that their brains never fully developed. Children like Petric, who was admitted into the system at age 7, were often tied to their beds and left lying in their own excrement--cold, naked, starving--fearing physical and mental abuse from staff and older children. Most children were too frail to eat or walk; instead, they would crawl on the filthy floors or simply sit and rock back and forth, their arms wrapped tightly around their knees. Bodies of the dead were stacked under the stairs until burial, which only occurred on Wednesdays. These were concentration camps for kids. To protect themselves from appearing weak and thus vulnerable to attack, many of the children, though emaciated, quickly learned that they needed to seem tough and unapproachable. They accomplished this by continually beating other children. Injuries were left untended. Petric, himself, suffered a broken leg that was left to heal on its own, leaving him disabled and unable to walk—a death sentence in the orphanage. At age 10, Petric had at most two months to live when he and both his brothers were rescued from the system by American physician Ron Federici who adopted the boys and raised them with love and care. Surgery to correct his broken leg helped Petric walk again, though with a slight limp—a constant reminder of his terrifying past. He recently returned to Romania to bring closure to that part of his life which has haunted him for so long. The trip included an angst-inducing visit to the now abandoned orphanage and, after 16 years of separation, Petric was able to visit his mother in a tearful reunion, full of grace and forgiveness. 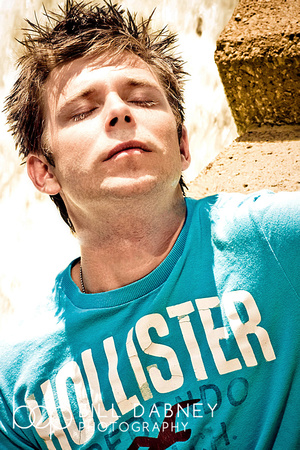 Someday, when he is financially able, he wants to return for an extended stay to help those who were less fortunate than him, using his own experience to make a difference in the lives of others. His ultimate goal is to somehow bring hope to those who feel hopeless.

He knows the feeling well.

Here is his story:

Tommy S(non-registered)
Petric is truly a remarkable person. He is smart, witty and has an infectious sense of humour. Having chatted with him a few times I knew he has quite the backstory but like Bill, I never imagined the depth of that story. He is such an inspiration and shows just how powerful the human spirit can be. Thanks so much for sharing this Bill.
Tina Redfearn(non-registered)
wow Bill! This story is just so many emotions wrapped into one! Thank you for sharing it.
No comments posted.
Loading...
Subscribe
RSS
Recent Posts
Family Portraits: Rowan Oak with the Hotards Dabney Photography Gets Billboard Magazine Credit Wedding Photography: Claire Hearts Will Event Photography: Theatre Oxford Photoshoot: Headshots with Aspiring Model Petric Engagement Photography: Kathryn & Jordan The Friendship Phenomenon Event Photography: Rugby Reunion Get It! Photo Session with Nashville Artist Mickey Utley Welcome
Keywords
photography portrait advertising promotion publicity headshot talent celebrity event fashion
Archive
January February March April May June July August September October November December
© Bill Dabney Photography
User Agreement
Cancel
Continue